RMC Sport journalist Mohamed Bouhafsihas revealed that French giants Paris Saint Germain (PSG) are interested in signing Mohamed Salah from Premier League outfit Liverpool. According to him, PSG have Salah on their list of possible replacements for key player KylianMbappe if the French World Cup winner leaves the club this summer. 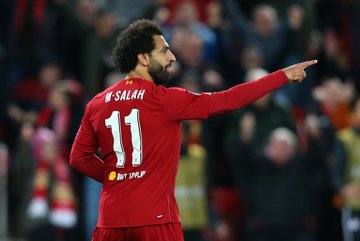 PSG attacker Mbappe has been in sensational form for his club this season but he has one year left on his contact. The French champions are determined to retain his services for many years to come by offering him a new deal but it's not certain that the player will sign the new contract. PSG don't have any option but to sell Mbappe if the young French striker does not sign a new contract at the club this summer. They might need to sell him or risk losing him for free next summer when his current deal runs out.

Neymar and Mbappe are the two biggest stars at PSG. Brazilian international Neymar recently signed a new five-year deal at the club having been in the same contractual state as Mbappe and he would be hoping that his friend would join him soon in penning a new contract.

Liverpool talisman Mohamed Salah is a key player for his team and he could be a good replacement for Mbappe if he leaves PSG. Salah marked his second century of appearances for Liverpool with the clinching goal in the impressive 4-2 win at Manchester United on Thursday. He has now scored 124 goals in his 200 matches for the Merseyside giants.

Salah has been a key performer for Liverpool since his transfer from AS Roma in the summer of 2017. He has been able to form a potent attacking trident with fellow African star Sadio Mane and Roberto Firmino at Anfield. He has also won the Premier League Golden Boot Award on two occasions.